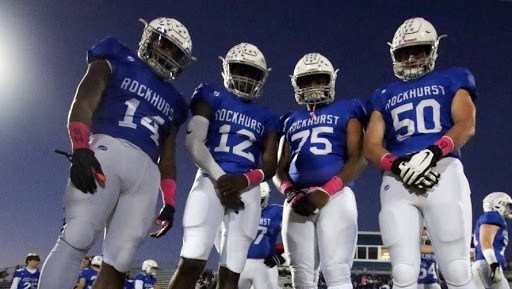 The season of autumn has officially arrived. The leaves have changed color, and for some it just so happens to be the season of high school playoff football.

One of the schools that looks primed to take the state title is the Rockhurst Hawklets. The Hawklets are led by their newly inducted Hall of Fame head coach Tony Severino, in his 35th season at Rockhurst High School.

Rockhurst is looking for their tenth title in school history. They have had championship seasons in 1971, 1981, 1983, 1986, 1987, 2000, 2002, 2007, and 2010. Coach Severino has won seven of those championships. In 1983, Severino took over the football program at Rockhurst. He came from Shawnee Misson West, and almost took a coaching job at the University of Kansas. He chose Rockhurst because of how much it reminded him of his all Jesuit all-boys school back home in Cleveland, Ohio.

Something I find truly special is that some of his past players still take care of him to this day. One former player is his financial advisor and another is his doctor. I think people need to be reminded of the importance of the people around us and the impact they may have on your life now and in the future. Severino has made an impact in high school football in Kansas City. He was inducted into the Missouri Sports Hall of Fame in January of 2018. And, when asked how long he will continue coaching, Severino said, “When I forget what it was like to be an 18-year-old kid, and when I run out of energy, then it’s time for me to get out. I still haven’t forgotten yet what it’s like to be a player.”

To start the class 6A playoffs on Friday, November 2nd, the third ranked Rockhurst Hawklets, with a record of (9-2) took down second ranked Lee’s Summit West Titans (9-2) by a score of 38-14.

Led by running back Michael Johnson who averages 131.7 Rushing yards per game, Rockhurst will take on the top seeded Lee’s Summit North Broncos in the District Final of the Missouri class 6A playoffs on Friday 11/9/18 at 7 pm.

Follow your team during the playoff action online on 810 Varsity.com and U-Click TV.