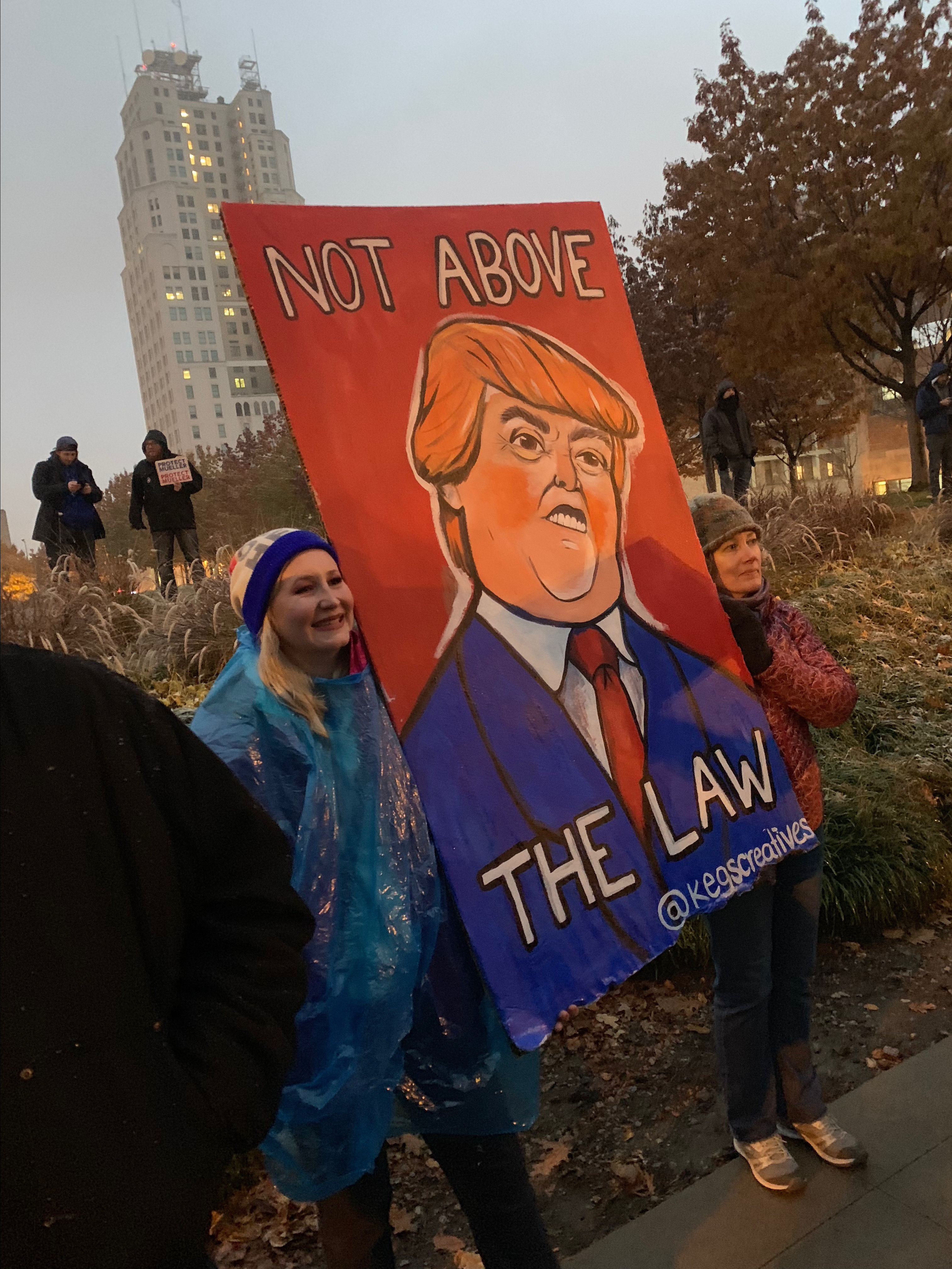 Just hours after president Trump fired U.S. Attorney General Jeff Sessions, activists across the country decided that on Thursday they would participate in direct action against the president’s decision to fire Attorney General Jeff Sessions by protesting a move that they believe threatens Special Counsel Robert Mueller’s investigation into Russian interference during the 2016 presidential election.

Nationwide, thousands of demonstrators, aided by progressive advocacy groups like MoveOn and Indivisible, have organized on short notice to deploy in cities like Lawrence, Kansas and St. Louis, Missouri. Two of these protests took place at 5pm on Thursday, November 8 in downtown Kansas City. One group of demonstrators gathered at the Liberty Memorial before marching 2 miles to City Hall where they met a separate group of protestors that had set up on the steps of Charles Whittaker Courthouse.

“People are marching to support democracy, not demagoguery”, said Doug Shafer, one of the organizers of the protest. Shafer is a 67 year-old real estate broker in the Kansas City, Missouri area, and a board member of MORE², the Metropolitan Organization for Racial and Economic Equity, founded in 2004. Shafer, a registered Democrat, and MORE² were critical in gathering enough support for Amendment 1, or Clean Missouri, to pass on Tuesday with more than 1.2 million votes.

Shafer’s views are not uncommon among those gathered this evening in temperatures that are well below freezing. Many others expressed feelings that they think nobody, including the president, should be above the law. Most of the demonstrators are convinced that the appointment of Whitaker as acting Attorney General will throw the fate of the Russia investigation into doubt. Whitaker has stated publicly that he thinks the probe has gone too far.

“I think it’s a terrible idea. I think the president is trying to obstruct justice,” said another protester, 31 year-old Ryan Shropshire. Ryan, a registered Democrat from Lees Summit, says he has voted in every election since he was 18, though he acknowledged that protesting was not usually his thing.

En route to the rendezvous point, protesters from the Liberty Memorial group marched past the offices of Missouri Senator Roy Blunt, hoping to send a message that he and his colleagues should support legislation to protect the Special Counsel and the integrity of his investigation. Two such bills have gained bipartisan support in both the House and the Senate, though full floor votes have not been called and the legislation remains dormant in both chambers.

Steven Goldberg, a 26 year-old software engineer, was one of roughly 200 protesters outside the courthouse. Steven said he was protesting against the administration’s recent actions to undermine the Special Counsel’s investigation.Though he follows politics regularly and voted for the Democrat’s in the midterm elections this past Tuesday, Mr. Goldberg told me that this was his first protest. When asked why he was braving the 30 degree weather and snow to show support for the Mueller investigation, he said that it’s because he felt that something needed to be done. “Who knows if anyone is paying attention, but I can’t just sit back and do nothing. I have to try.”

After the protest, Shafer, the organizer, said that “It’s encouraging to be in a crowd like this where people are proud of being citizens.” He goes on to say that “these are the same people who were out knocking on doors this past election. These are people who vote, but who also realize that voting is not enough.”