South Kansas Citians Among Those Celebrated in 70 Over 70 Program

The Shepherd Center’s 70 Over 70 Awards are a new initiative in the Kansas City area that celebrates older individuals for community achievements. On Oct. 30 the individuals were honored at a luncheon sponsored by Kansas City businesses and hosts at the Kansas City Convention Center ballroom. Proceeds from the luncheon benefited the Shepherd’s Center, an interfaith organization that provides programs, leadership and advocacy for both active and homebound older adults.

Below are just a few of the honorees who live in or near the Telegraph circulation area. The entire list of 70 is at sccentral.org/70over70/. Congratulations to all! 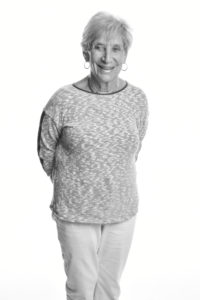 Judy Sherry, age 78,  has been involved in civic initiatives and nonprofit boards. But after the 2013 shooting at Sandy Hook Elementary School claiming 26 children’s and teachers’ lives, she turned her focus to preventing gun violence in our region. She founded Grandparents Against Gun Violence, which today boasts 1,500+ supporters of its work to keep children free of gun violence at home, in school and in the community. She also led formation of the Heartland Coalition Against Gun Violence, a collaborative of 33 organizations presenting an annual forum on gun violence, and she served on Mayor Sly James’ Citizens Task Force seeking solutions to violence in the region. In any remaining free time, she participates in AIDS Walk Kansas City and volunteers at the Jewish Family Services Food Pantry.

Joanne Collins, one of the nominees, is an active member and volunteer in the

community. Currently, she does volunteer work for Truman Medical Center, the Women’s Foundation, Salvation Army, the Central Exchange and several more. She served on the Port KC board of commissioners until 2015, where she was involved in the minority opportunity loan fund, redeveloping the KC Waterfront and Richards-Gebaur Airport and reestablishing the Missouri River Port. Also a former city councilwoman, Joanne was honored in 2017 by KCMO Public Schools as a role model and by EDCKC in 2013 for her outstanding contributions to the city’s economic growth.

Ann Stern, another nominee, is the very definition of consummate volunteer. The groups she serves are too numerous to list but a few including SAFEHOME, United Way, FosterAdoptConnect, and Jackson County Court Appointed Special Advocates (CASA). Ann isn’t afraid to bend the rules for a good cause – as CASA volunteers, she and her husband would often help families buy groceries and provide a few extra dollars for gas money to help parents get to work.

Max DeWeese, another nominee, is a 97-year-old United States Marine Corps Veteran and served in WWII, receiving two Purple Hearts. Returning home, Max volunteered for Toys for Tots, served as a Salvation Army bell ringer, and tutored third-graders in math at Hartman Elementary. Currently, Max delivers for Meals on Wheels once a week and volunteers for veteran-focused charities.

Carolyn Caniglia’s, age 78, business accomplishments include co-owning a construction company, writing a marketing book and serving as a radio host. She shares her passion for painting with residents of senior living communities and then turns their work into art for greeting cards. She also runs a foundation that provides blankets and pillows to homeless families in the Olathe School District. Caniglia likes to host “girls nights” several times a year where a cross-section of ladies gather to draw inspiration from one another, and her family has hosted foreign exchange students from Switzerland and Brazil.

Alvin Brooks, 86, founded Ad Hoc Against Crime in 1977 when he was  KCMO assistant city manager and former police officer. AdHoc worked with prosecutors, the homicide squad and FBI to help find answers to a string of murders on Kansas City’s east side. The idea for forming a justice-focused community coalition grew out of a theory Brooks outlined in his master’s thesis, and it became an internationally recognized model for promoting safety, addressing high crime rates and consoling victims. Although Brooks has transferred his leadership to a new generation, Ad Hoc continues to work toward healing injustice. A longtime community leader and civil rights advocate, he also served as a member of: the City Council; the KCMO Board of Police Commissioners; and the Hickman Mills School Board.

Dorothy Johnson, age 84. People start lining up on the sidewalk in front of St. James United Methodist Church around 3:30 p.m. most Wednesdays. The church’s popular food pantry opens its doors at 4. For the past 25 years, pantry organizer and volunteer Dorothy Johnson has been there with a welcoming smile to greet the 200 or more individuals who use this service. The mother of seven uses her lively imagination and energy to dream up new ways to help those who are struggling. She saves up her change and takes it to the credit union to exchange for dollar bills, which she tucks into plastic bags to hand out to the homeless. Friends say she is the first person to send a card or share an inspirational story with someone who needs a lift, and she purchased personal Bibles for everyone in her pew at church.

Lois Lakey, age 83.  has been a volunteer at the neonatal ICU at Children’s Mercy Hospital there for 20 years, holding and rocking critically ill newborns, singing to them, letting them cry in her arms and letting them know they are loved. She spends 20-30 hours every week providing a critical difference in the lives of these babies. The volunteer coordinator at the hospital says, “There is hardly anyone here who doesn’t know who Grandma is, from housekeeping to the medical staff. Her work is appreciated by so many. Her smiles, positive attitude, love, compassion and humor make CMH not just a better place for the critically ill babies she holds, but for everyone around her as well.”

Mary A. Long, age 70, is a legendary educator with fingerprints  all over Kansas City

public education. The former Metropolitan Community College dean of instruction directed a variety of programs and services, including those aimed at breaking the cycle of welfare dependency by providing real-world experiences. As a member of Societas Docta, Inc., Long mentored and supported women of color who pursue a doctorate degree. She serves on several professional and governmental boards, including the president’s Community College Community Advisory Committee. Now retired, she co-chairs the Friendship Baptist Church’s Adopt-a-School ministry at nearby Melcher Elementary. With an eye toward broadening career awareness, she helped arrange for over 60 professionals to visit classrooms.

Anne Massa, age 89, has volunteered since 1990  to teach the class “Sit and Be Fit” at Adventures in Learning, a Shepherd’s Center program. Participants describe it as excellent in terms of low-impact muscle strengthening, toning and balance. One student who was having difficulty walking began to attend the class and noticed definite physical improvements. “I would not be walking today if I had not taken this class,” the student told a friend. Massa exemplifies the notion of living a purposeful life to the fullest, providing a sense of meaningful community in the classes she leads. In addition to teaching skills, she explains why the stretches work and the benefits of improving balance. She addresses the whole person, and the knowledge gained in her class is healing.

Sue Miller, age 77, has volunteer at the Shepherd Center  as a receptionist and an assistant for the Adventures in Learning program. Miller proves volunteers can play vital roles in the success of nonprofit organizations. Colleagues describe her as an important part of the team, just as dedicated and hard a worker as a paid employee would be. She’s “the perfect balance of grit and grace,” they say. Although it isn’t always easy for her to come to “work,” she demonstrates commitment and dependability, finding the silver lining and making the most of her day even if she is having a tough day physically.

Lucille Tutera, age 87, founded Tutera Group with her late husband, Doc, in 1985. Lucille Tutera has approached the position of family physician as a way of life rather than a career. Often found at the bedside of her residents and patients across the metro area, Tutera is respected and revered for raising care to an entirely new level.  As the administrator of Atrium Senior Living Community, a founder of the Inspired By You Foundation at Tutera, and a strong force in other philanthropic causes throughout the city, her influence extends far and wide. She embodies generosity and instills strong values in her company and community.