Know your Grandview School Board candidates 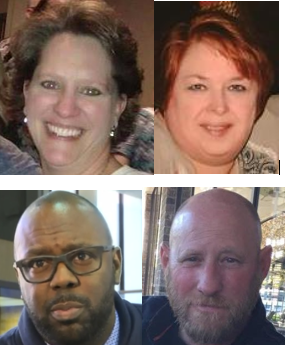 Four candidates are running for two seats being vacated by retiring incumbents on the Grandview Board of Education. Voters must choose two.

Amy Blankenship – 46 – Blankenship and her husband own a small real estate investment firm, and she is office manager for a firm he partially owns that administers qualified retirement plans.  The couple has four children who graduated from Grandview High School and a daughter who is a junior.

She received the school district’s Volunteer of the Year Award for 2017 and is treasurer of the Grandview High School Booster Club, Diamond Club and Touchdown Club.  She also is director of the prom dress giveaway program at First Baptist Church in Grandview.

Blankenship said the students are the main reason she volunteers, and she feels blessed to have had so many opportunities to volunteer at the high school which have allowed her to truly connect with the students and encourage them that they can accomplish their goals.

“Watching the wonderful things the current and past boards have been able to accomplish has given me the desire to help keep the momentum going,” she said.

Dawn Foy, 56, is retired from fulltime employment with the district in 2016, the same year her daughter graduated from GHS, after serving 22 years as a classroom teacher, grade level chairperson, school improvement specialist and summer school principal.  Her late husband also worked for the district for over 20 years, last serving as director of maintenance.

She is still a substitute teacher and a member of the Grandview Education Foundation, the district’s Employee Recognition Committee and two organizations of retired teachers.

Foy said if elected she plans to work with other board members and the community to ensure necessary resources are available to give Grandview students the best possible education that prepares them for a college or career path that will make them productive citizens and lifelong learners.

She also noted she wants to communicate effectively with all stakeholders to show them the growth and improvement of Grandview students and schools.

Don Kessinger, 53, is a 1984 graduate of Grandview High School, is parks maintenance supervisor for the city of Grandview.  His wife Sandy is a Grandview Alderwoman from Ward 1.

The couple has three grown children who all graduated from GHS.  They currently serve as ambassadors for the nonprofit Caring for Kids program for High Grove Early Childhood Center that provides volunteer help and resources for projects and activities not funded by the district.

He said he is proud of recent successes of the district such as its students winning the Battle of the Brains competition and a permanent exhibit based on their project recently opening in Science City at Union Station.

He said that as many workers holding skilled trade jobs retire, schools need to address the need for skilled workers by providing both college and career paths for students, acknowledging that all high school students are not destined for college.

Tyrone Watson-Ferguson, 39,  is vice president for IT security at Security Bank of Kansas City.

He and his wife have two sons who have attended district schools.  One is a junior at Grandview High School, and the other is a 5th grader at Meadowmere Elementary School.

With a master in business administration degree from Park University and 20 years of management experience in the banking industry, he said he would like to utilize his expertise in process improvement to help the district objectively identify and prioritize practical improvement opportunities.

Get to know your Center School District School Board candidates