A gift to the world of wine: The rich history of Missouri’s vines 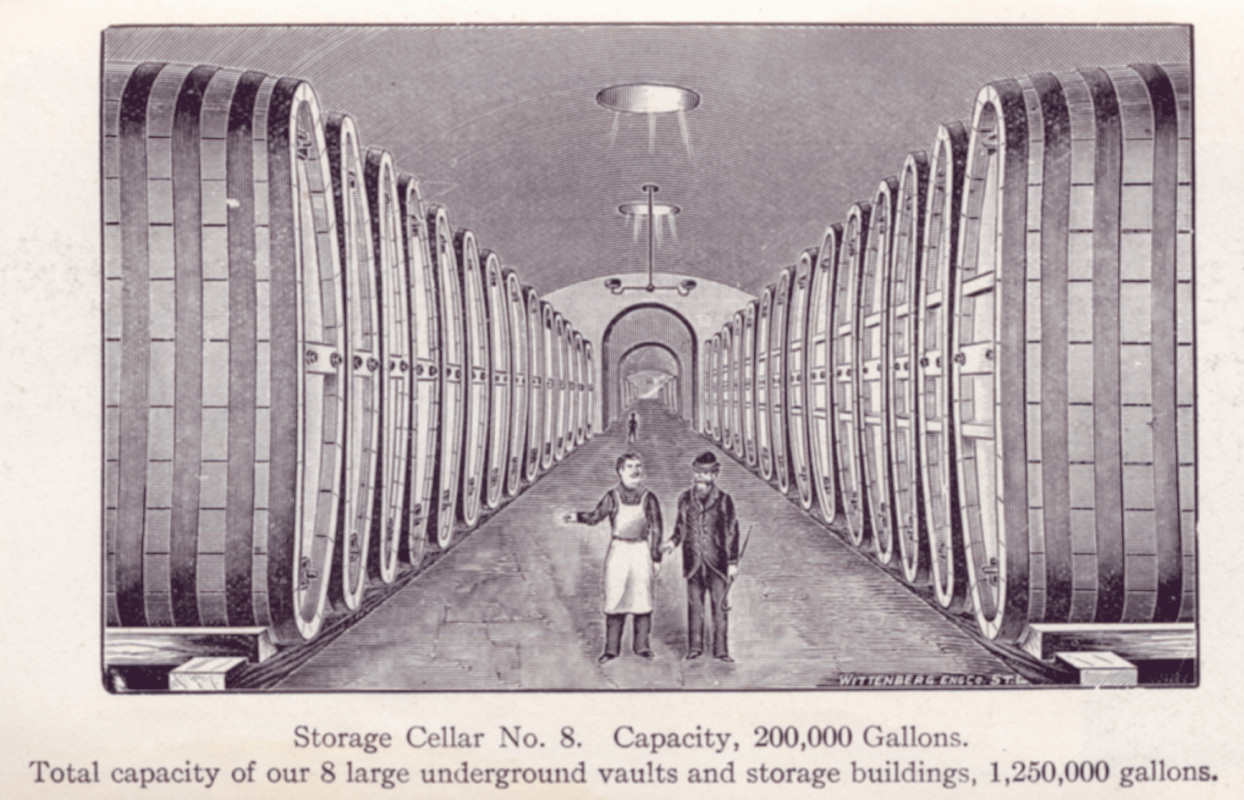 A gift to the world of wine: The rich history of Missouri’s vines

Fifteen years ago, I graduated from college and had my sights set on working within the wine industry. With wide eyes and an appetite for all things wine, I crossed the state and spent a summer working at Mount Pleasant Winery in Augusta, Mo. At the time, under 40 wineries existed in the entire state. In the past decade, the industry has exploded.  The history of Missouri wineries and its early origins in the Missouri Rhineland have a fascinating past that is worth exploring past a pour in a glass.

The Land of Milk and Honey

To understand the complex history of winemaking in Missouri, we have to follow the trail of immigration of Germans to the state. The influx of Germans originates with the writings of a man named Gottfried Duden (1789-1856). Duden visited the area along the Missouri River from St. Louis to current-day Hermann in the 1820s.

Duden purchased land in current-day Warren Co. about 50 miles from St. Louis. In 1829, his writing was published and became one of the most widely-popular books on migration to the United States. He wrote of Missouri’s “great fertility of the soil, its immense area, the mild climate, [and] the splendid river connections.”

The description of the land, especially the cheap prices, had the Germans jumping on the boats to head to Missouri in the early 1830s.

Building Communities in the New Rhineland

The earliest Germans to follow Duden’s writing came in 1832 and established the town of Dutzow in Warren Co. where they sold lots at cheap prices with excellent terms. Soon after, the German Settlement Society of Philadelphia was also following the writings of Duden. Newly-arrived Germans wanted to find a remote location that would allow them to live in America but still maintain their language, customs and heritage. In 1836, the German Settlement Society picked up 11,000 acres of land and named the new settlement Hermann after a German hero from the 4thcentury.

By 1839, Hermann boasted a population of 450 with “90 houses, five stores, two hotels and a post office” and became the largest town in the Rhineland. However, there was one major problem with these new settlements: the land was rocky and not suitable for farming.

They did notice something interesting within the forests in the area. There were wild grapes growing abundantly. Friedrich Muench (1799-1881), who led 500 Germans into Missouri to the Dutzow region, wrote, “In all the rich lowlands are to be found vines of gigantic growth, often as thick as a man’s body, and reaching over the tops of the highest trees.” In the fall, after the hard frost naturally sweetened these wild grapes, people would go into the woods and gather fruit to press for their juice. They used it to make vinegar and, to no surprise, wine.

In 1843, the first cultivated vine was planted to make use of the natural ability for grapes to be grown in the region. These grapes from other areas proved successful. Production tripled in a year, and the first wine, allegedly of good quality, was a sweet wine.

The town of Hermann and the surrounding area saw the possibilities of this newfound business venture. In 1844, the town offered “wine lots” on an interest-free basis and set off to fill 600 lots at $50 each. The plan worked.

Missouri’s Oldest Winery is Established and Money is Made

In 1847, German immigrant Michael Poeschel (1810-1893) started what would become Stone Hill Winery. Poeschel started making wine for himself at this point in history, but by 1848, he was shipping 1,000 gallons of wine to markets. He was described as “a magnificent specimen of German character who makes indifferent work at speaking English” and “a clever and hospitable gentleman.”

Poeschel established current Stone Hill Winery in 1869 where buildings from this period still stand today. By the 1870s, Stone Hill was winning international awards for winemaking and was shipping 1,250,000 gallons of wine per year. The price range in 1870 was anywhere from $1.30 to $4.00 a gallon (with a 10% discount for over 40 gallons). At one time, it was the second largest winery in the nation and the third largest in the world.

Another man hard at work in the early history of Missouri wines was George Husmann (1827-1902). Born in Germany, Husmann came with his family to America when he was nine and settled in Hermann around 1840.  Self-taught in school and in winemaking, Husmann created hybrids from cultivated wild grapes that could stand the Missouri winter. He established his first vineyard in 1847, and within a few decades, his practices became the model for Missouri wineries.

Finding the right grapes to produce wine in the region was Husmann’s specialty. The Virginia Seedling (commonly called Norton) was first planted in 1845 and quickly became a favorite of the region. One visitor to the area in 1870 stated this wine was unlike anything he had tasted; it was “rich, black and heavy” and “a most excellent drink for summer diseases.”

Hermann became known as “The Wine City of America.” When barrels were emptied, it was said that the streets ran red through the town. By the 1860s, Hermann ranked with Cincinnati and New York state as the biggest wine-producing areas.

While spending that stimulating yet not-as-romantic-as-I-thought summer working at Mount Pleasant Winery, one fact became perfectly clear: the wine industry is very proud of their role in “saving the French grapes.” The story, although told in many different ways, always ends the same: Missouri is the heroine.

In the 1860s, a 13 acre area of grapevines in the lower Rhone area died. Just as with untreated diseases today, the problem quickly spread and was devastating the region. By 1868, there was a major problem and no one knew how to solve it. French botanist Jules Emile Planchon believed the problem to be Phylloxera, a disease that fed on the vine roots and eventually destroyed the plant. He thought he had found the problem, but he didn’t have a way to solve it.

In 1871, European roots were sent to America for study and Missouri’s state entomologist Charles V. Riley began to examine them in St. Louis. Interestingly, Phylloxera is native to America; native grape vines had tougher roots that could resist the disease that European roots lacked. Grafting European vines onto roots grown from American cuttings was thought by Riley to be the best method for overcoming the disease – and he was right.

Because of Riley’s findings, French wineries devastated by the disease asked for a huge amount of these resistant vines grown in Missouri. By this time, self-taught George Husmann of Hermann was running a successful nursery in Sedalia, Mo. Husmann, along with two other Missouri grape growers shipped thousands of their clippings to Europe. As a result, the French were able to save their vineyards from further devastation.

The event was so coveted in French wine history that a statue was erected in Montpellier, France featuring a young woman cradling an older woman, representative of the New World (Missouri) taking care of the Old World.

After saving the French grapes and being recognized for it by the French government, George Husmann moved to Columbia and became professor of pomology and forestry at the University of Missouri. By 1881, he found a calling further to the west and left for California to “study the wine interests” there. He soon found himself in the heart of what would become California’s coveted viticulture area: Napa.

He wrote numerous books and papers on the topic of growing grapes in both Missouri and California, and his success in Missouri is what led him to be one of the most respected vintners. His talents for the topic of winemaking started in Hermann and culminated in California. Described as “unmistakably German, with sparkling eyes full of humor,” Husmann is considered the father of the Napa Valley wine industry. He died in 1902 and is buried there.

The railroad made California wines accessible, and they quickly became immensely popular due to the fact that they had a familiar taste to European wines. Even when California grew to be the top producer of wine in the nation, Missouri was still second (producing over three million gallons in the early 1900s) before the 18th Amendment passed in 1919.

Vines were chopped down or burned- barrels were cut into pieces. Wine production in Missouri and across the nation ceased to exist. Some former operations such as Stone Hill were sold and used for mushroom growing while most former operations disappeared completely. Adam Puchta Winery, two miles west of Hermann, was established in 1855 and was still in operation when Prohibition hit. The family barely survived by converting their vineyard into farmland.

Slowly but surely, the wine industry in Missouri did bounce back but never as strong as before Prohibition when over 100 wineries shipped product across the nation. Towns such as Hermann still ooze historic charm and German heritage not forgotten after their vines were destroyed. Adam Puchta’s descendants picked up where he left off; today, it is the oldest family-run winery in the nation.  In 1965, what was once Stone Hill Winery and its historic buildings were bought and reopened. Mount Pleasant Winery (est. 1859) in Augusta, Mo. where I cultivated my own interest in wine reopened in 1966. Around 40 years later, approximately 40 wineries existed. Today, over 130 wineries scatter across Missouri, many being located a short drive away from our homes. Many of them are available on wine lists and on the shelves of liquor and grocery stores.

The history of Missouri wine and its place among the nation- and world’s- wine industry shouldn’t be ignored. Started by German immigrants seeking a new home where they could maintain their cultural identity, the Missouri wine story is one that matches the tenacity of the American immigrant- those who saw promise and cultivated hope on rocky soil.

Diane writes a blog on the history of the area. To read more of the stories, go to http://www.newsantafetrailer.blogspot.com