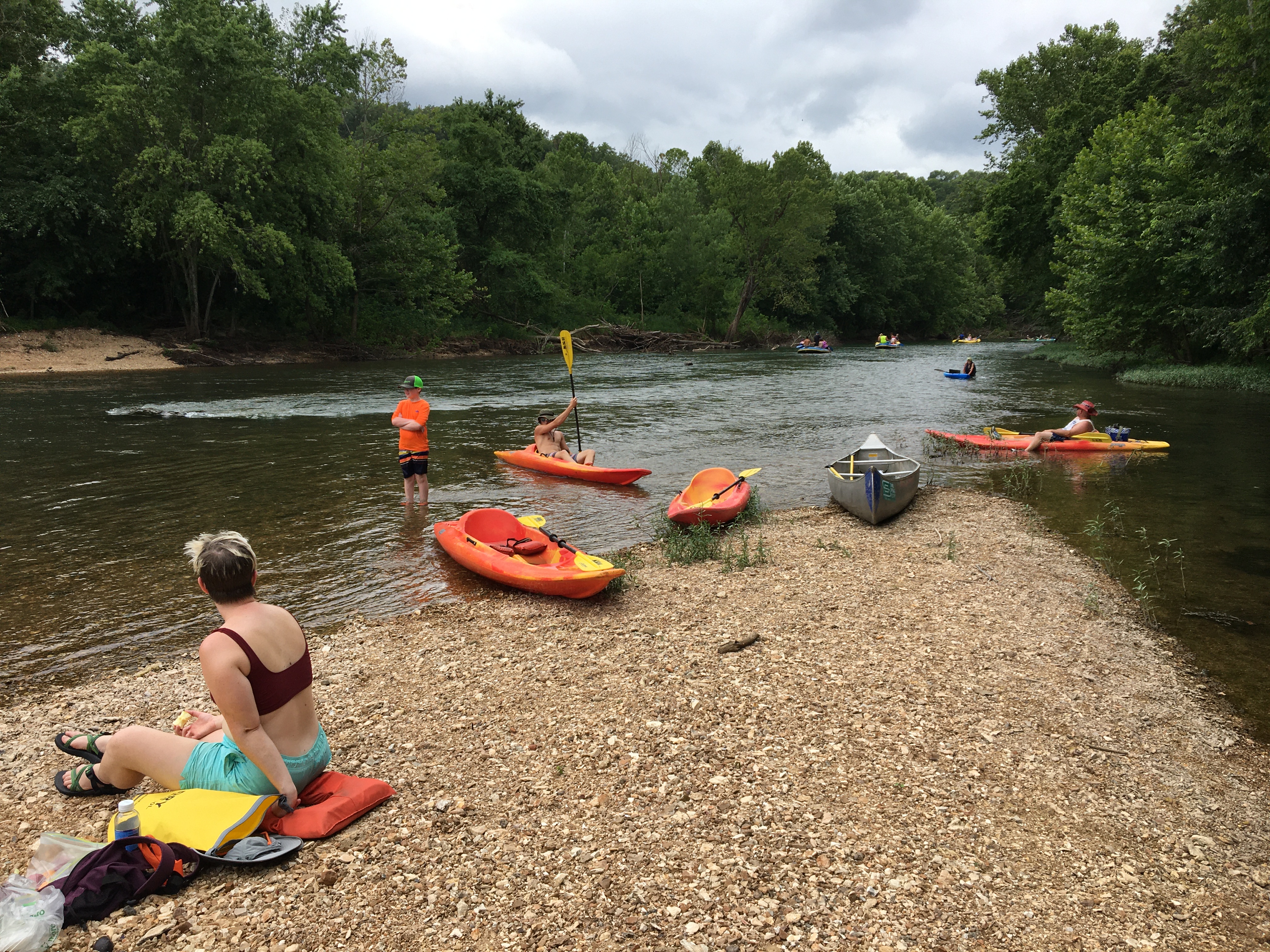 Story and photos by Jill Draper

One of the best fishing rivers in Missouri is also one of the easiest to float, whether by canoe, kayak or raft. And it’s only three hours away.

The Niangua River offers cool, spring-fed water that flows through tree-lined banks. Turtles sunning on logs and birdsong in the branches above made for peaceful stretches on a recent weekday afternoon, but it’s a popular Ozarks river and around nearly every bend the sounds of nature were punctuated by chatter and laughter from groups of floaters. Weekends are even busier and rowdier.

Gravel bars provide frequent stopping points for swimming, picnicking or fishing, although many of the serious trout fishermen don chest waders and stand in the water at Bennett Spring State Park to cast for rainbow trout released daily from a state fish hatchery there.

The Niangua starts in Webster County and runs north 125 miles until it reaches the Osage River and the Lake of the Ozarks, but most float trips center around Bennett Spring, about 12 miles west of Lebanon. Under average conditions the river has few whitewater sections and requires only a little skill in maneuvering around rocks and tree roots. But do check the water level before going, and wear sturdy water shoes.

Various outfitters offer put in and take out services; canoes rent for $40-$50 per day, kayaks are about $30 and rafts are $90-$150 depending on the size. An 8 to 11-mile float is an average distance for a leisurely day. You can drive back to Kansas City that same night, but it’s more fun to book a campsite, cabin or a room at a rustic resort and explore another state park, Ha Ha Tonka, the following day.

An Osage Indian phrase for laughing waters (according to folklore), Ha Ha Tonka features a milky blue-green spring, a natural rock arch and the hilltop ruins of a magnificent mansion or “castle” built by Kansas City businessman Robert Snyder. He purchased more than 5,000 acres in Camden County in the early 1900s and paid Scottish stone masons to supervise local men in constructing a house, a carriage house/stable and an 80-foot-high water tower.

In 1906 tragedy hit when Snyder was killed in one of Missouri’s first auto accidents. His sons completed the castle in 1920, but misfortune struck again in 1942 when the building was destroyed by fire.

The ruins are easily accessed by a short, paved trail from a parking lot. A longer trail leads in the opposite direction to Ha Ha Tonka Spring at the bottom of the hill. This path is more difficult with 316 steps along a wooden boardwalk. The spring is also accessible from a closer parking lot, as is a natural rock arch.

Here’s a sample two-day itinerary: Leave Kansas City at 7:30 a.m. to be on the river by 11 a.m. Spend the rest of the day on the water, then stay overnight at your choice of accommodation. Options for dinner are limited–bring your own food (most places have grills), grab a burger or sandwich at Sand Spring Resort’s Gravel Bar and Grill, or try the Bennett Spring Dining Lodge. The town of Lebanon, population 15,000, is about 20 minutes away and offers more choices.

On the second day, head into town (if you’re not there already) and find a breakfast place on the old Route 66 (The Elm Street Eatery is a classic diner). Then drive 25 miles north on Highway 5 to Camdenton. Exit on Highway 54 and go west through the town for a few miles to Ha Ha Tonka State Park. After seeing the sights, head back toward Kansas City on Highway 7, perhaps stopping for lunch in Warsaw (the Cosmic Café is popular) and/or to walk across a 600-foot suspension bridge—the last of 15 swinging bridges that once crossed the Osage Arm of Lake of the Ozarks. Built in 1904, it was destroyed by a tornado and rebuilt in 1928. Now it’s listed on the National Register of Historic Places and is only open to pedestrians and bicyclists.